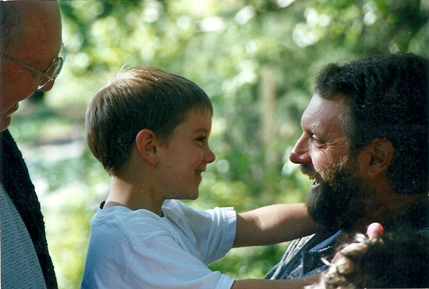 This case timeline provides highlights of key events that take place over the course of 12 years of Damon’s 16 years of his life.
Details of these events can be found in the Case Facts and Chronology section.

August 2000 Ms. Dumas leaves Maui for Reno Nevada with the boys to attend school to study psychology at the University of Nevada; Mr. Moelter stays behind to work as a surveyor and to manage and prepare their Maui multi-tenant property for sale.

December 2000 Ms. Dumas moves with the boys to Salinas, California to attend college at San Jose State (the University of Nevada psychology program was impacted).

August 2001 Ms. Dumas, without communicating to Mr. Moelter, moves with the boys to San Diego, California to attend Alliant University to study psychology (the San Jose State psychology program was impacted). Mr. Moelter was unable to locate Ms. Dumas and his sons for over a week. Ms. Dumas family denied any knowledge of Ms. Dumas’ and his sons’ whereabouts during this period

March 2002 After a year and a half of being separated from his sons, Mr. Moelter moves from Hawaii to California having finally sold their Maui real estate holdings. Previously he had been making trips to California to visit with his sons.

October 2002
Per the divorce decree visitation schedule the boys stayed with Mr. Moelter every other weekend and Wednesday afternoons from 3-6pm.

Ms. Dumas emails Mr. Moelter about the boys’ first overnight visit with him including Damon’s bed wetting issues – that he should bring Damon to the bathroom at night, and that Damon sometimes gets up in the night to sleep with her and so may do so with him [Mr. Moelter].

February 2003 Ms. Dumas tapes two interviews she conducted with her sons regarding visits with their father and contacts child protective services (CPS) to report her molestation allegations.

May 2003 Ms. Dumas alleges that Mr. Moelter has inappropriate contact with Damon in the presence of the supervisor. The supervisor rejects this allegation.

May 2008 Judge appoints licensed psychologist to conduct a 730 Family Psychological Evaluation including the allegations of molest. Ms. Dumas refuses to participate in evaluation.

July 2008 Psychologist concludes, even five years later, in his report to the Court that Ms. Dumas is responsible for abuse to the children not Mr. Moelter.

August 2008 Detective B, five years later, removes Mr. Moelter from the California Child Abuse Central Index because a polygraph test given by Jack Tramarco clearly demonstrates Mr. Moelter has never molested Damon and that the 2003 polygraph had been done incorrectly (see Q&A 7). Mr. Moelter was only one of two individuals among tens of thousands accused of abuse on the index to be removed from this index before the ten year expiration (if no charges are filed).

January 2009 Damon joins his brothers in reunification therapy with Mr. Moelter and his wife

June 2010 The day before Father’s Day Ms. Dumas posts flyers around Mr. Moelter’s neighborhood implying that there is a child molester at Mr. Moelter’s address and that their children may be in danger.

May 2011 A few days before Mother’s Day Ms. Dumas had mailed flyers to Mr. Moelter’s parents’ neighborhood warning that their son is a child molester and visits regularly. Mr. Moelter, his wife and sons, including Damon, had plans to visit his mother for Mother’s Day.

June 2011 Ms. Dumas mails flyers to Mr. Moelter’s wife’s parents and brother alleging that Mr. Moelter is a child molester and warning that he may endanger other children.

May 2012 Ms. Dumas distributes flyers on cars in the boys’ high school staff and student parking lots regarding Damon’s case, urging people to sign a petition to Judge C (new judge who replaced Judge A whose tenure had ended in Family Court).